From Farm to Family: Apple Harvest in the Yakima Valley

When the first glimpse of fall hits the Yakima Valley, we know harvest is about to go into full swing. The hard work and labor of hundreds of farmers finally comes to fruition, and it’s time to harvest the crops that the Yakima Valley is known for. This valley is home to some of the most bountiful farms and orchards in the world, producing millions of pounds each of apples, cherries, hops, pears and more each year.

When it comes to apples, the Yakima Valley is the largest growing region in Washington, boasting nearly 70,000 acres of apple orchards in 2017. The valley earned its first-place apple growing title in 1964, and farmers have continued to increase production year after year. With incredibly nutrient-rich soil, an arid climate and plenty of water winding through our waterways, we live in one of the most ideal locations for agriculture in the world, especially when it comes to apples.

Washington’s annual apple harvest typically yields more than 130 million boxes of apples, each weighing about 40 pounds. That is a lot of apples that are carefully picked, processed and packaged and then shipped all over the world. Yakima apples were first exported to Asia in 1913, making a huge mark on export potential and leading the way for Washington apples to be sold in more than 60 countries today. Of Washington’s 2015-2016 crop, over 33 million boxes were exported to other countries for people who love the satisfaction of biting into a crunchy apple — something that put Yakima on the map.

Apple harvest is the busiest time of year for Allan Bros. Inc., a 100 year-old family owned company. They have a robust cherry season, but apples are what keep their farms bustling day after day.

According to Allan Bros. CEO Miles Kohl, the company anticipates a harvest of four million boxes this year from their over 1,500 acres of apple orchards. That’s 160 million apples that will make their way to consumers all over the world from just one grower in our humble little valley. But they certainly wouldn’t make it very far without the work of all the skilled laborers involved. Allan Bros. employs hundreds of people each year for harvest, and they make it possible for all of us to enjoy apples in the many ways we use them to feed our families.

Apple harvest typically begins the middle of August and goes through the second week of November, according to Kohl. And it’s one big logistical puzzle. “The growing season starts in November of the previous year, carefully analyzing each block for planting and production. There are a lot of moving parts that get us to a final product,” said Kohl.

When harvest season hits, blocks of apples are picked two to three times, ensuring each apple picked is of the best quality — it’s not just done in one fell swoop.

When it’s time to harvest, a number of things are tested and taken into consideration before an apple is plucked from the tree. Scientists test for firmness and starch and sugar levels, and also perform mineral and color analyses.

Apples aren’t picked until they’re at the peak of perfection, and when they are deemed ready for picking, it’s a fast-moving process. Harvest doesn’t wait.

Groups of workers take ladders out into the field, focusing on a specific location. They pick fast and furiously by hand, carefully placing each apple into a reinforced bag. Once a bag is full, it’s emptied into a wooden or plastic bin — each of which can hold 1,100 pounds of apples. From there, a forklift tractor moves the full bins to a flatbed truck, which then takes them to the apple packing line.

The new packing line at Allan Bros., now the largest in the world, is a testament to the massive amount of apples grown here in the Valley. Allan Bros. is just one of many multi-generation farms that have put so much hard work into planting and growing produce to serve consumers around the world. Hundreds of people are involved in the complicated puzzle of apple harvest to make things run smoothly, working hours on end, all to bring you a freshly picked-by-hand piece of fruit.

We are so fortunate to live in a valley full of fresh produce rotating throughout the seasons — all right at our fingertips. Whether you stop at a fruit stand or farmers market, spend the afternoon at a U-pick farm or buy from your nearest grocery store, fresh produce is never far from the beautiful place we call home.

This Apple Streusel Loaf Cake recipe is a great way to use those freshly-picked apples. The mixture of cinnamon and nutmeg will add a comforting fall scent to your home. I hope you enjoy this great treat and share it with your friends and family. 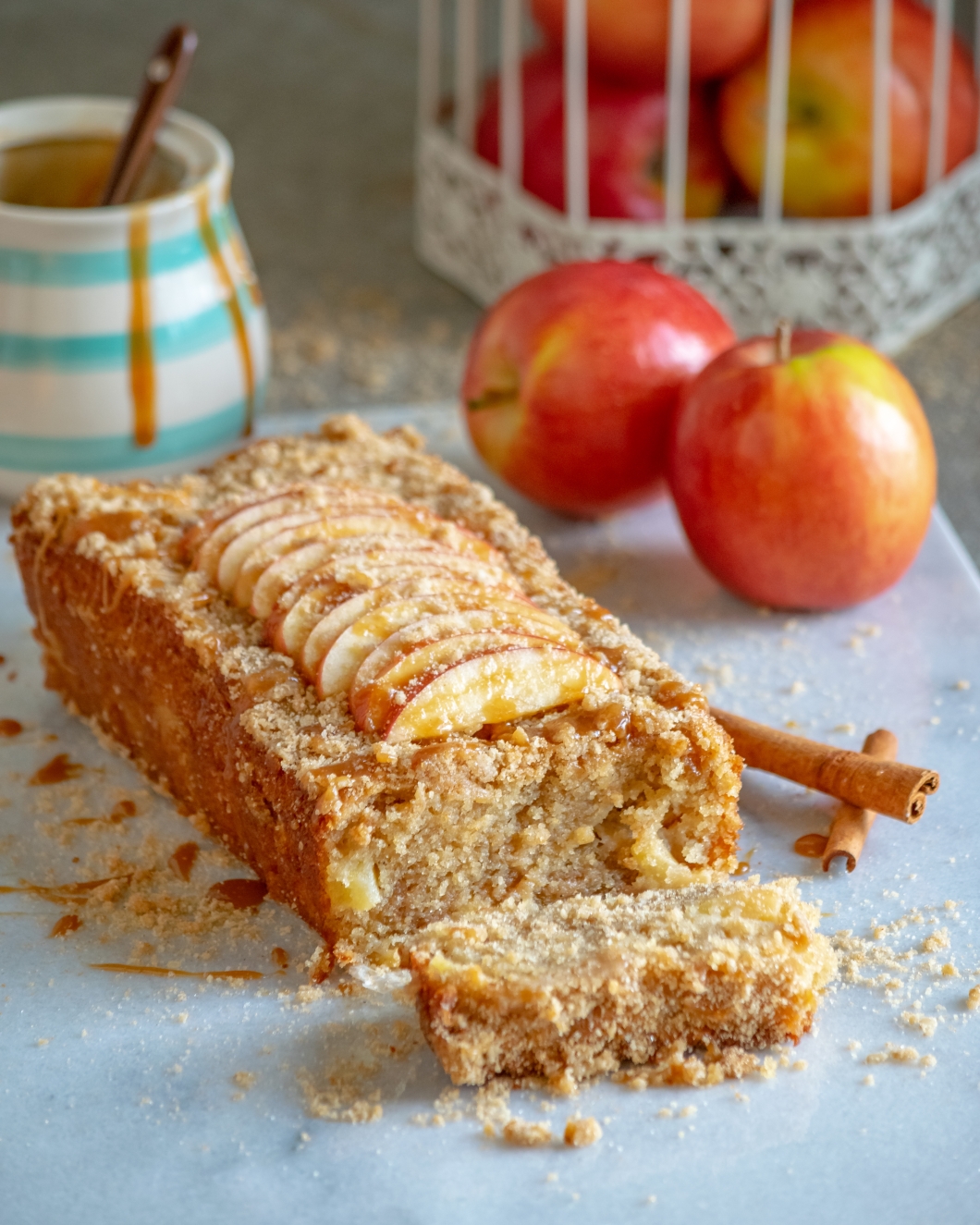 Ingredients For the Batter

Ingredients For the Topping

Stir brown sugar, white sugar, flour, cinnamon and salt together in a bowl. Cut your stick of butter into cubes. Using a fork, pastry blender or your hand, work the butter pieces into the dry mixture until large clumps form.

Grease a large loaf pan. Fill the pan 3/4 of the way full, then sprinkle struesel topping over top. Bake for 40-45 minutes, until edges are golden brown and a toothpick inserted into the middle of the loaf comes out clean. Once cooled, top with your favorite caramel sauce, if desired.